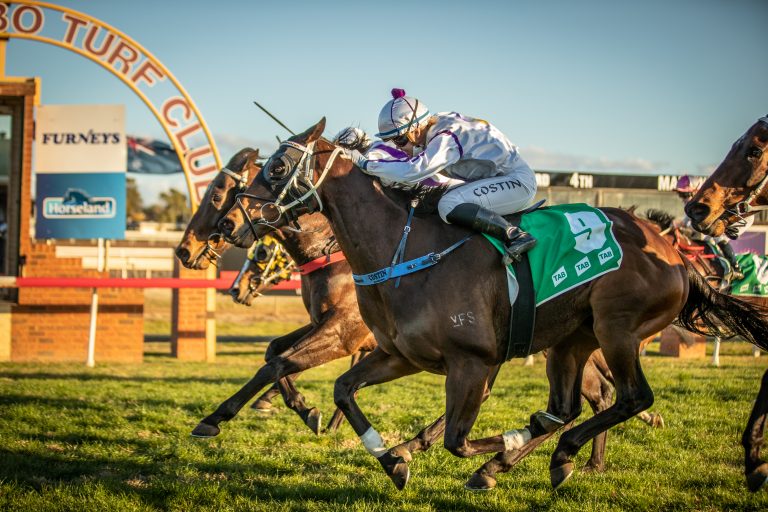 Mitchell and Desiree Kearney never planned for it, but it looks as though their galloper, Heza Gentleman, will now head to the $100,000 Dubbo Gold Cup on September 12 after a gritty win in Sunday’s Prelude.

“No, we never planned for it at all, we were going to take him to town,” Desiree Kearney explained.

“I saw the extended noms and I said to Mitch, ‘we should nom him for that race, it’s a winnable race and perfect for him’.

The five-year-old is a noted on-pace runner but was forced to take a sit early in the 1400m race, with the pace clapped on by Wishfilly and race-favourite Eiger, but jockey Winona Costin stuck close enough, peeling four and five wide on the home turn.

Heza Gentleman then dug in for the fight, beating home a game The Bald Eagle in a close finish, winning by 0.01 of a length, while Eiger was 0.25 of a length further away in third.

“It definitely was a very gritty run to be there in the finish,” Kearney said.

“They went really quick early, they didn’t give him a chance to get on the early speed and he actually relaxed in the run and if he can get a similar run to yesterday, he will be quite right over the mile.”

Kearney praised Costin for the clever ride, believing she was the difference in the end.

“That was tough,” Kearney said.

“She is such a strong rider. She is the one that got him across the line, she put everything into it, and I couldn’t give her enough credit for it.”

Now the stable will focus on getting the Nicconi gelding out to eight furlongs for the first time in his 31-start career.

“When we were travelling up, we thought, ‘what if he wins, will he get out to the mile’, because he is untested over the mile,” Kearney explained.

“Being a Nicconi, we were worried he couldn’t get a mile, but his mother was bred to run a long distance, so it’s not impossible.”

The Hawkesbury stable has a plan ahead of the Dubbo Gold Cup, and Kearney said it was now just a matter of waiting to see if he could handle the longer trip and step up in class before heading off for a well-deserved spell.

“He will have three weeks, then he will have another run and then two weeks into the Dubbo Cup and more than likely, he will go to the paddock after that.” Kearney said.

Since returning from a 17-week spell, Heza Gentleman has been a picture of consistency, finishing second at Goulburn twice and at Nowra before finishing third at Royal Randwick before his breakthrough Dubbo victory.

“He has come back this preparation a much better horse and next prep, he will improve even more and if he keeps racing the way he does, he will only get better,” Kearney said.

Whilst the Kearney stable were dreaming big ahead of the 2021 Dubbo Cup, they were just pleased for their loyal owners, who have enjoyed the ride with the ever-consistent galloper.

“We are hoping lockdown eases and they can make it to the cup. They are a great group of owners; they love him, and they are very spiritual about their horses and their racing.

“The group of owners have been good friends for about 30 years, and it is nice to see them having some fun.”

It was memorable day of racing at Dubbo on Sunday and in the second feature event on the program, the Brett Cavanough trained Dubai Tycoon won his way into the $50,000 Flying Handicap on September 12 by winning the John McKinnon Memorial Cup Sprint Prelude.

In a brilliant finish, the Dar Lunn trained race-favourite Classy Rebel led for most of the journey, only for apprentice jockey Madeline Owen to peel off the leader’s back with Dubai Tycoon and win by 0.38 of a length.

For full results from the seven-race-program, readers can click here.