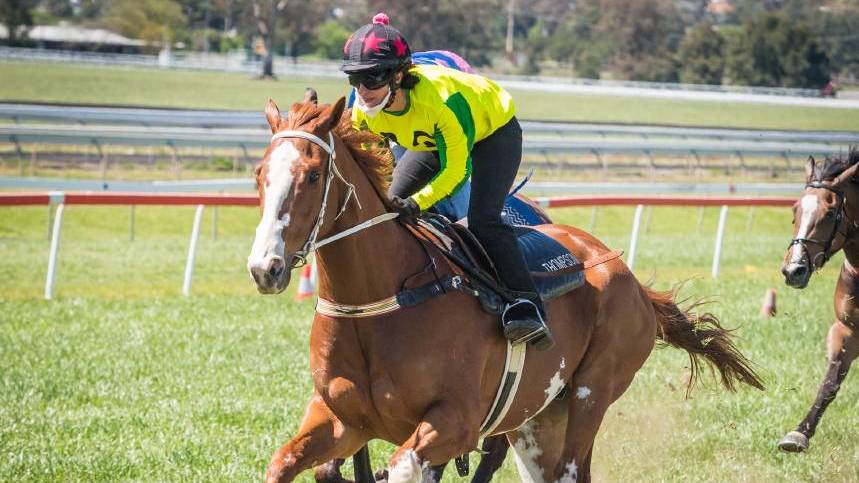 Brett Thompson has enjoyed a long and successful training career but few wins have meant as much as the one scored with Press Sydney at Dubbo Turf Club on Sunday.

The Gulgong-based Thompson Racing team and wider racing community is in mourning following the death of apprentice jockey Marina Morel.

Morel, 30, died as the result of injuries sustained after a tragic fall during trackwork at Gulgong last Tuesday.

The popular young rider was airlifted to Westmead Hospital following the incident, where she remained in intensive care up until her passing on Saturday.

The three-year-old filly was regularly ridden by Frenchwoman Morel during her time with the Thompson team and the victory provided a brief moment of joy during a particularly difficult time for all involved with the stables.

"It's a big boost for the stable," a visibly emotional Thompson told Sky Thoroughbred Central after the win.

"I just want to wish everyone the best, everyone involved with us and Marina's family.

"Marina used to ride her (Press Sydney) work along with Lizzie Theobald and they're some of the best people in the business.

"To have these people around me, I'm proud."

Adding to the occasion, Press Sydney was ridden to victory on Sunday by Jake Pracey-Holmes.

Pracey-Holmes is also based in Gulgong and was formerly an apprentice under Thompson as well while his partner, Theobald, has a strong involvement with the team also.

"I love Jake like he's my own son," Thompson added.

"It's just great to have him for the win and for the owners. I told them this filly would be a nice filly and she is.

"She wants a mile or 2000m but it was a super run first-up over 1000m and it's just really good for whole stable and the family and all the staff and Marina's family."

Morel arrived in Australia in 2014 before pursing her racing interest.

She went on to ride trackwork for trainer Luke Thomas at Cessnock, prior to joining the Brett Thompson stable in 2021, where she became licensed as apprentice jockey.

She achieved her dream of becoming a jockey and went on to ride 10 times, with four of those being for Thompson.

"It's really hard for everyone," he said.

"It's really sad to have a beautiful person like that leave us so early.

"Condolences go to her mum and dad and this was a good little win for the filly and I'm so glad to get it for the camp."

The Thompson Racing team also paid tribute to Morel on social media on the weekend, describing her as a "beautiful soul inside and out" who will be remembered as a natural talent.

"On behalf of Thompson Racing stable and staff, we would like to send our deepest condolences to Marina's family," the statement read.

"Marina ... will be so very missed by her Thompson Racing family.

"Her love for horses was so natural and incredible. We are all truly better people just for knowing Marina, and forever thankful that she was part of our team."

A memorial service will be held in Morel's honour at the Mary of the Presentation Catholic Church, Mudgee, on Tuesday at 12pm.

Attendees are invited to dress in bright colours to reflect Marina's bright outlook towards everyone.

There will be a gathering afterwards at Club Mudgee.